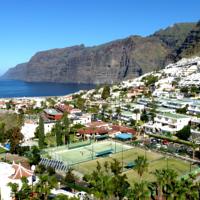 Original apartment complex situated directly in the port Los Gigantes and only a few metres from the beach, in the south-west of the island.  More

This is a typical, low lying Canarian construction, with a large gardened patio that connects its various spaces. The furnished apartments can hold up to four people.

There is a salt-water swimming pool in the complex, designed by César Manrique and a natural lake with a large sun lounge named “El Laguillo”.

Participation in activities such whale watching, scuba-diving, fishing or water skiing is easy thanks to the location of this complex.

This apartment features a balcony with views of the ocean and Los Gigantes Cliffs. . More

This air-conditioned apartment has 1 double bedroom, 1 twin bedroom, and a bathroom with a bath, shower, hairdryer, and free toiletries. Bed linen and towels are provided, and a washing machine is available.

There is a living space with a flat-screen TV, sofa, and dining table, while the kitchen is equipped with a dishwasher, electric kettle, microwave, and coffee machine. The balcony includes outdoor furniture.

Activities in the surrounding area include fishing, hiking and diving.

You can find a restaurant, bar, and grocery shop within a 10-minute walk of Apartment Acantilado. The nearest beach is 1.3 km from the property.

The apartment features free Wi-Fi and a private terrace.  More

The spacious 2-bedroom apartment has a living room with a large sofa bed and TV. An oven, dishwasher and washing machine are included in the kitchen. There are 2 bathrooms.

Featuring a dining table, the terrace offers views of the pool and the Atlantic Ocean. Guests can find bars, restaurants and supermarkets within 500 metres.

Playa de la Arena Beach is 300 metres from the apartments. Los Gigantes Harbour and Cliffs can be found within a 5-minute drive. Tenerife South Airport is 44 km away.

Los Gigantes is a resort town in the Santiago del Teide municipality on the west coast of the Canary Island Tenerife.

Its main feature are the giant rock formations, Acantilados de Los Gigantes, that rise from the sea to a height of 500-800 metres (1,640–2,625 ft) after which the town has been named. Los Gigantes means “The Giants”.

Nearby to the south are the resorts of Puerto de Santiago and Playa de la Arena. 3 kilometres (1.9 mi) to the North is the village of Masca which can be reached by boat or car.

The town has a marina surrounded by concrete walls to dampen the effect of the rough seas around the area. A small black sand beach lies between the rocks and the marina.

The marina has a boulevard with many restaurants. Close to the harbour is a lido.

The cliffs at Los Gigantes, Acantilados de Los Gigantes in Spanish, are one of the island’s major tourist attractions.

There are three viewpoints in the village, the main one on main road to towards Tamaimo, another above the sports club and a third on a coastal path around the Hotel Barcelo.

The village has many small shops and restaurants servicing the tourists that visit the area, especially on the one way road loop around church and plaza, and also near to the marina and beach.

Los Gigantes is well known for it’s spectacular imposing cliffs. Beyond the cliffs are the equally amazing Teno mountains.

The town has a small pedestrian square in it’s centre with shops surrounding it.

From the small usually un crowded black sand beach, that is next to the marina, view the bay as it sweeps round to the north  and the spectacular cliffs of the Acantilados de la Gigantes which tower up from the sea.

It is the beauty of these lava formed cliffs that attract tourists to this area.

As can be expected there are hills and steps so not recommended for anybody who has difficulty with mobility.

The terrain prevents expansion of Los Gigantes and there is little chance of finding a parking space.

The clear blue sea is ideal for snorkeling

Each year, in February, there is a carnival which parades through the village. As can be expected of a town resort, Los Gigantes has only one hotel but lots of apartments compared to regular residences. 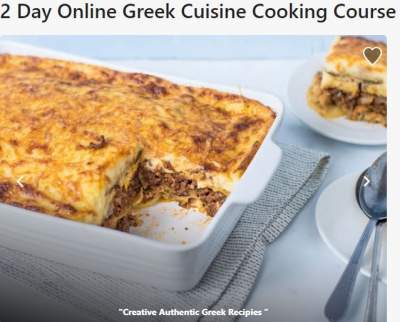 Real Greek cooking Courses a selection from top Chefs to fit in with when it is convenient for yourself to take part.

Been thinking of stepping up your culinary skills?

Then this is your opportunity