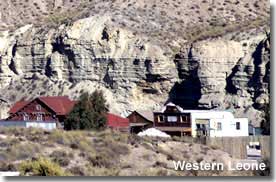 Western Leone located in Tabernas in Almeria Spain. Western Leone the town owes its name to the director who was instrumental in universalising the landscape of Almería as a film location, the Italian Sergio Leone, and who we can thank for creating the spaghetti western cult film genre.

The smallest of the three theme parks, advertising wild west shows, a saloon bar and a restaurant.

Glimpses of the desert tee-pees on the outskirts of the village, and the village itself, can be seen from the A-92 highway.

This film set and western village was originally built to film Once Upon a Time in the West (1968) staring Henry Fonda and Charles Bronson, one of a series of spaghetti westerns directed by Sergio Leone and filmed in the Tabernas desert.

Those who remember the movie may recognise the desert town of Sweetwater and the McBain Ranch.

ACCESS: Signposted from the roundabout at junction 376 of the A-92 Almeria to Guadix highway, this junction links to and the N-340a Tabernas to Sorbas highway.
Tlf: 950 165 405

Owes its name to the director who was instrumental in universalising the landscape of Almería as a film location, the Italian Sergio Leone, and who we can thank for creating the “spaghetti western” cult film genre.

This is where o­nce Upon a Time in the West was filmed, directed by Leone and starring Claudia Cardinale and the legendary Henry Fonda, as well as The Good, the Bad and the Ugly and

Come and enjoy one of the most authentic sets of Sergio Leone, where you will feel like a cowboy.
Enjoy our western town, the original ranch and the Mexican village.
Taste our Mediterranean meals and experience live scenes of the wild west.

The magnificent Nerja Caves — Cuevas de Nerja — are a series of huge caverns stretching for over four kilometres and feature amongst the top tourist attractions in Spain.

A trip to Andalucía would not be complete without a visit to the Nerja Caves, one of Spain’s most popular and spectacular historical sites. Costa del Sol Information.