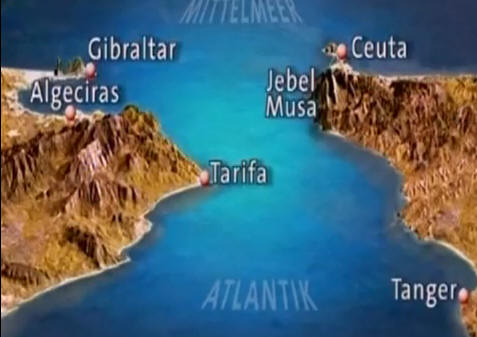 Algeciras Algeciras is principally a transport hub and industrial city. Its principal activities are connected with the port, which serves as the main embarkation point between Spain and Tangier

Hotel Reina Cristina opened its doors in 1901 and since then its clientele has included members of the Spanish and English aristocracy and other international celebrities. More…

This area of the city has been populated since prehistory, and the earliest remains belong to Neanderthal populations from the Paleolithic.

Due to its strategic position it was an important port under the Phoenicians, and was the site of the relevant Roman port of Portus Albus (“White Port”), with two near cities called Caetaria (most likely Iberians) and Iulia Transducta (Tarifa), founded by the Romans themselves.

After being destroyed by the Germanic Barbarians and their Vandal allies, the city was founded again in 711 by the invading Moors, as the first city created by the Arabs on the occupied Spanish soil.

It enjoyed a brief period of independence as a taifa state from 1035-1058. It was named al-Jazirah al-Khadra’ (“Green Island”) after the offshore Isla Verde; the modern name is derived from this original Arabic name (compare also Algiers and Al Jazeera).

In 1344 the city was reconquered by Alfonso XI of Castile. It was retaken by the Moors in 1368, but was destroyed on the orders of Muhammed V of Granada. The site was subsequently abandoned.Algeciras was refounded in 1704 by refugees from Gibraltar following the territory’s capture by Anglo-Dutch forces in the War of the Spanish Succession. It was rebuilt on its present rectangular plan by Charles III of Spain in 1760.

In July 1801, the French and Spanish navies fought the British Royal Navy offshore in the Battle of Algeciras, which ended in a British victory.The city hosted the Algeciras Conference in 1906, an international forum to discuss the future of Morocco which was held in the Casa Consistorial (town hall).

In July 1942 Italian frogmen set up in a secret base in the Italian tanker Olterra which was interned in Algeciras to attack shipping in Gibraltar.

During the Franco era, Algeciras underwent substantial industrial development, creating many new jobs for the local workers made unemployed when the border between Gibraltar and Spain was sealed by Franco between 1969 and 1982.

In 1982 there was a failed plan codenamed Operation Algeciras conceived by the Argentinian military to sabotage the British military facilities in Gibraltar during the Falklands War.

The Spanish authorities intervened just before the attack, and deported the two Argentine Montoneros and military liaison officer involved.

Algeciras principally a transport hub and industrial city. Its principal activities are connected with the port, which serves as the main embarkation point between Spain and Tangier and other ports in Morocco as well as the Canary Islands and the Spanish enclaves of Ceuta and Melilla.

It is ranked as the 16th busiest port in the world. The city also has a substantial fishing industry
In more recent years it has become a significant tourist destination, with popular day trips to Tarifa to see bird migrations; to Gibraltar, to see the territory’s unusual sights and culture; and to the Bay of Gibraltar on whale watching excursions.

Ctra Del Rinconcillo Esq Hermanos Portilla, Algeciras
Located on the Rinconcillo road by the northern access route in to the city of Algeciras, next to the port and only 1 km from the city centre, this is a hotel boasting state of the art technologies. More…