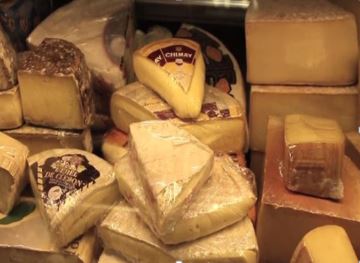 Spanish Cheese listings guide Cheese Listings Cheese lovers information on a selection of Local Spanish cheeses from all over Spain.  Cheesy recipe books for fans of such.

Also known as ‘Minorcan’ cheese, this fresh cheese is made on the Balearic Islands with raw or pasteurised cow’s milk from the Frisian, ‘Mahonesa’ or ‘Minorcan’, or the Alpine Brown breeds.

Valdeon is one of the best known Spanish blue cheeses, from Leon, high in the Picos de Europa mountains. (D.O. Valdeon) Made from a mixture of unpasteurised goat, cows and ewes milk.

The natural rind is dipped twice during the ripening process in red wine, so that it absorbs the fruity, slightly spicy flavour and aroma of the wine and also gives it its nickname of the ‘Drunken Goat’!
Best drunk with a young red wine to complement the winey flavour of the cheese. (Denomination of Origin Murcia)

La Mancha Manchego has a firm and compact consistency and a buttery texture.

The colour of the cheese varies from white to ivory-yellow, and the inedible rind from yellow to brownish beige  Cheesy recipe books for fans of such.

Spanish Idiazabal cheese from the Basque area of Spain

is produced in the shape of a cylinder, with a smooth and hard natural rind that is pale yellow to amber in colour.

The cheese has a compact texture, with a few pinprick holes. It is dry, but not crumbly, and feels pleasantly oily in the mouth.

Try Goats cheese with paprika or Goat cheese with Rosemary or perhaps a Hamper.
Spanish goat cheese is made from the rich milk of goats that graze on the lush pastures, infusing the milk with the aroma and flavour of the terrain. A Creamy and dense cheese.

All of the milk used in the production of Cabrales comes exclusively from herds raised in a small zone of production in Asturias, in the mountains of the Picos de Europa.

Torta del Casar is a Spanish cheese made from raw sheep’s milk in the Extremadura region, near the Portuguese border.

Cheese is an ideal present.

It’s incredible to think that just five years ago, there were very few Spanish cheeses available in the United States. Perhaps the Spanish wanted to keep them all for themselves. They are THAT good. Try for yourself, with two of Spain’s best cheese accompaniments.

Spain has a large variety of over 100 different cheeses, surpassed by very few countries. Discover the name, geographic origin, varieties and elaboration process of the most representative cheeses of the Spanish Gastronomy.

When Spain was in the process of joining the European Union it began introducing the “Denominación de Origen” to classify premium food products (much like that of the Spanish wine industry).

Of the more than 100 Spanish cheeses currently in production 27 have been designated as “Denominación de Origen Protegida” (DOP) or “Indicaciones Geográficas Protegidas” (IGP) (Source: Gobierno de España).  Each board regulates the geographical environment, the raw materials and products produced, and the human influence in the finished product.

Finally, each product of a DO is labeled with the DO logo and a number, making each cheese a unique item.

Spanish Cheese Listings Cheese lovers information on a selection of Local Spanish cheeses from all over Spain.